Our First Novitiate and What It Teaches us Today 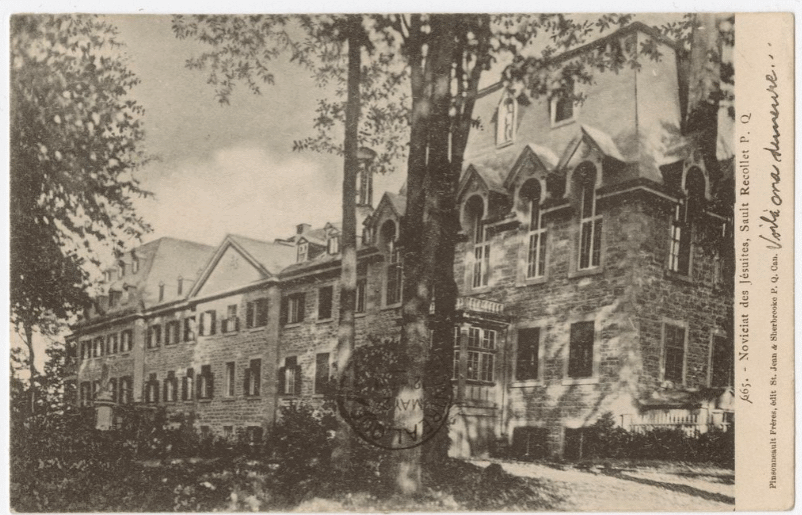 The current Jesuit novitiate for Canada is situated in Villa-Saint-Martin, on Boulevard Gouin, the longest street (50 km) in Montreal Island. It takes you from eastern to western tip of the island, running along the Riviere des Prairies, the northern border of the island. In a week-end walk exploring the eastern part of Boulevard Gouin,

I was transported into the past. This boulevard is an old rural road, and already in the 18th century along it were built traditional farm houses, many of whom, nestled among the more modern residences on what is now a busy suburban street, are featured today with descriptive plaques.

In the earlier days there were rapids along the river, but now they are dammed and exploited by a hydro-electric power station.

In the early 17th century, before the Jesuits came to New France, the Recollet Franciscans were active as missionaries to the natives. One of them, Nicolas Viel, drowned in the rapids together with a young Frenchman nicknamed Ahunstsic. (Ahuntsic gave his name to a municipal area in Northern Montreal from which hails our own Archbishop Terrence Prendergast.)

Viel was remembered in an early village known as Sault-au-Recollet, with the oldest standing church in Montreal, built in 1749. I then remembered that the first novitiate of the Society in Canada and the first Jesuit cemetery were situated in Sault-au-Recollet, and wondered if the building was still there. It is, and I found it.

It was built in 1852, expanded over the years with three wings, and is still in use, but not in Jesuit hands. This novitiate was moved to Saint Jérôme in 1960.

Soon after the move of the first Jesuit novitiate to modern quarters in Saint Jérôme, the novitiate building was occupied by College Saint Ignace, one of four Jesuit Colleges in Montreal which offered a “cours classique” leading to a B.A. degree:

(2) Loyola College, which separated from Collège Sainte Marie in 1896 to offer courses in English,

In 1969 a former brothers’ school, named Mont-Saint-Louis, found a new setting in the then empty old novitiate, which they bought from the Jesuits. Some of the novitiate wings were razed, newer buildings were added, and the Jesuit cemetery on the property was disinterred and moved to Saint Jérome, a complex and difficult task carried out by the Jesuit brothers. The old novitiate now serves as a building within the Mont-Saint-Louis complex.

The original architect, Fr. Felix Martin, laid the groundwork for a handsome and solid building, and rather than being torn down, it is now being renovated, as you can see from the current photo.

The first novitiate served the needs of both anglophone and francophone novices. The current novitiate, established in Montreal, serves the same needs. But between these two novitiates there is an interesting story to tell.

The Society of Jesus returned to Canada in 1842 as a Jesuit mission, which eventually became one Canadian province in 1907, in 1924 split into two provinces, one francophone and the other anglophone. In 2018 we have come together again as one province.

Back in 1913 it was felt necessary to open an English speaking novitiate in Guelph, which continued till 1994, when novices of the English Canada province were sent to St. Paul MN. In 2008 our novices returned to Canada to a newly founded bilingual novitiate in Montreal.

The original novitiate continued for French-speaking novices from 1913 to 1960, when it moved to a brand new building in Saint Jérôme, and after Vatican II it moved to successive locations in the Montreal area to pursue a less institutional model for novice formation, finally settling into the new bilingual novitiate.

My meanderings led me to visit a venerable old building and acquaint myself with some Jesuit history, mostly in Montreal. Did what I learn change my perspective on the Society in Canada, its return in 1842 and its subsequent development? Not really, but it gave me an image to focus my reflections on these topics.

The story of Canadian novitiate formation is a rich and complex one. It is pleasant to have returned in 2019 to be geographically close to where we started in 1852, as one novitiate serving our entire country. Still the frequent changes of venue we have evoked tell us one thing loud and clear: the rapid pace of change will continue.

We are pilgrims, and we have no choice but to adapt as we continue our journey. There is an essential consistency, however, in what we have sought for our novices over the years. The Society ever continues to be itself.

To me this fact is imaged by the original novitiate building which I was delighted to discover, constructed solidly and attractively, still in use 167 years later, totally other than contemporary ticky-tack constructions with a fifty year life span. It has withstood the test of time and still stands, not now as a novitiate but as a reminder that the values that Jesuit novitiates have sought are perennial, but enfleshed differently in different times.

Finding the sweet spot where flexibility and stability coexist and enhance one another is a great grace and we must ask for it.

The novitiate story is bound up with many changes in Jesuit educational institutions. Moves, mergers, closures: we have only scratched the surface of these changes. They resulted in part from a wide-spread secularization, which in Quebec was known as the “révolution tranquille” and which, tranquil for the most part, proceeded with explosive speed, and in part from the anticipation of Jesuit superiors that Jesuit resources were becoming inadequate to continue running all our colleges in a rapidly changing educational environment.

The solution adopted back in the 1960’s and 70’s in three of four cases was a merger with a secular institution, with the continuation of Jesuit friendship and, for a time at least, of influence.

A few decades later the universal Society has moved in the same direction, with a policy of collaboration with non-Jesuits that does not necessarily imply control, a policy – in many cases – of joining others instead of having them join us.

Let us in our broader Jesuit pilgrimage take comfort from the same image of a venerable building, now undergoing yet more renovation and a face-cleaning, still standing through its various incarnations, because it was built for the ages.