Mary, Resistance, Refugees and Inspiration: A (Late) Sermon for the 4th Sunday of Advent.

After a very busy Christmas season I am finally able to get this sermon up for all to read. It was a very emotional Sunday that day when this was preached. I hope the emotion comes through in the written format.

This Sunday in our Advent lectionary readings we turned our attention to Mary and her role in the unfolding salvation story that has been unfolding. Mary, a poor, peasant, teenage, Middle eastern girl living in occupied territory in Palestine is revealed to be the conduit through which God will redeem the Hebrew people and the entire world. She is caught up in the divine plan, not coerced, but an active agent. She is not Mary meek and mild, no she chooses to be part of what God is doing: “Let is be with me according to your will.”

In the Gospel from Sunday we are told the story of Mary visiting her cousin Elizabeth who is also pregnant. When Mary enters the home of Zechariah and Elizabeth, the wild child, the future camel-skin-wearing and insect eating John the Baptizer, kicks uncontrollably in utero. So overcome are Elizabeth and Mary with the spirit of the moment that they both break into song. Elizabeth sings of the blessedness of Mary and her unworthiness to be witness to this holy event. 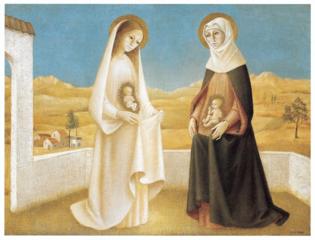 Mary too sings, and it is her song that captured the attention of so many ever since. Yes the Magnificat, held dear by all Christians and familiar to all Anglicans as a cornerstone of the daily office of the Book of Common Prayer:

And Mary said, ‘My soul magnifies the Lord, and my spirit rejoices in God my Saviour, for he has looked with favour on the lowliness of his servant. Surely, from now on all generations will call me blessed;  for the Mighty One has done great things for me,  and holy is his name. His mercy is for those who fear him from generation to generation. He has shown strength with his arm;  he has scattered the proud in the thoughts of their hearts.  He has brought down the powerful from their thrones, and lifted up the lowly; he has filled the hungry with good things, and sent the rich away empty. He has helped his servant Israel, in remembrance of his mercy, according to the promise he made to our ancestors, to Abraham and to his descendants for ever.’(Luke 2: 46-55)

What you should notice about Mary’s song is just how deeply political it is. It is a prophetic song of revolution, a song of resistance. This young, Middle Eastern girl living in a country occupied by the brutal Roman Empire proclaims the mighty acts of God who will once again liberate his people. Mary trusts and hopes that God will act to bring about God’s long awaited kingdom. But even as she sings her song of awaited salvation God has already acted, in and through her to bring about this Kingdom. It is though her, the God bearer, that God’s kingdom will eventually come. 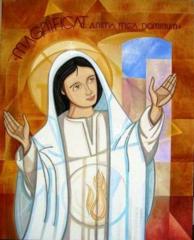 Notice too, that the revolution of which Mary speaks is not the typical one broadcasted on CNN or proclaimed from bully pulpits by firebrand insurrectionist. No, Mary’s song of resistance is one of compassion and justice. She is not calling for the replacing of one corrupt system with another corrupt one dressed up as a liberator. Hers is a revolution of love, love of God and love of people, especially the poor, hungry, weak and disenfranchised. Mary and her song have inspired generations of Christians to social action and loving service and still does today.

It is significant that we are reading about Mary today as we have just welcomed our refugee family from Syria. Yes this has been an emotional couple of days, an emotional Advent. The best word I can use to describe the whole process of sponsorship is overwhelming. It’s been overwhelming to see the generosity of the parish of St. Mark’s. It’s been overwhelming to witness the acts of kindness from the wider community. So what I want to do with the remainder of this sermon is tell you stories. Want to tell you the story of our Syrian Refugee Sponsorship, the subsequent media coverage and the outpouring of support we have received from so many people.

As soon as that picture appeared in the media, and you know the picture of which I speak. People from St. Mark’s came to myself and Father Mark “what is St. Mark’s going to do?” I have to admit I had my reservations. We were at the tail end of a capital campaign and I thought it would be too much to go back to the parish with another request for another financial commitment. But we went to vestry to get approval to go to the congregation to gauge support for a refugee sponsorship.

Around the same time Bishop Geoff was also encouraging Anglicans to get involved in whatever way they could. To launch our discernment we read the Bishop’s pastoral letter at a joint worship of our three worship times. We asked people for a financial commitment and/or a commitment of time to be a part of a group that would work closely with the refugee family as they adjusted to life in Canada. Within a week we had close to half of the money pledged. Within two weeks we had $20,000 pledged and a team of 20 people as part of a support team. To date we have raised over $25,000. We went back to vestry to get official approval to move forward. 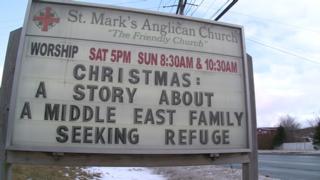 We entered into a sponsorship agreement with the Association for New Canadians and began the waiting process. We though this process would take 3-6 months, little did we know our family would be here before Christmas.

Along the way our story got picked up by the media along with a story on our sign that also tried to raise awareness of the ongoing refugee crises and it’s parallel with the Christmas story. The sign said “Christmas: A Story About a Middle East Family Seeking Refuge.” It was the media attention that really kicked the public response into overdrive.

What follows are stories of the support from in and outside of the church. The stories are moving and when you hear them you will understand why I keep using the word overwhelmed to describe how I feel. Another word that I will use in these stories is inspired. As you hear it I want you to think of the last time you heard people use that word in connection with the church. People use lots of words to describe the church, irrelevant, old fashioned, narrow minded, but inspiring is not one of them. But over and over again that’s what people said about our sponsorship effort.

Since our story broke in the media we have received countless offers of furniture which we declined but forwarded to the Home Again Furniture Bank, clothing which we directed toward the Single Parent Association of Newfoundland and toys which we told people to bring to the ANC or Bridges to Hope Toy Bank. We’ve had complete strangers come in off the street with financial donations great and small. Individuals who wanted to support our efforts and people who were part of lunch groups, neighbourhoods, families and offices. 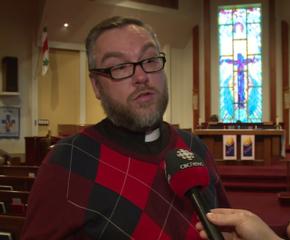 The arrival itself was very emotional. It was emotional enough to have this family arriving from war torn Syria. Their exhaustion and vulnerability was obvious. One of the first things that Father Mark said to them was “You are safe.” There were smiles and tears, both from them and us. As we waited for their meager baggage, people around us started to notice what was happening. People started coming up to the family to welcome them to Canada, one woman was visibly moved and in tears. Many people called myself, one of our volunteers Charlotte Barrington and Bishop Geoff aside to tell that we were doing a great thing. Many of them shaking our hands, some hugging us. 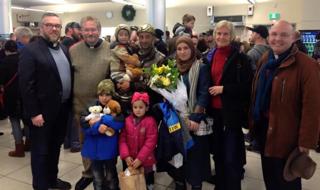 After we retrieved their luggage I circled around in my car to pick it up. I parked in a fire lane and very quickly a security person came by to tell me I had to move. I explained that I was waiting for our Syrian family who had just arrived. Unmoved he said I still couldn’t park there. I said I understood and went to drive away. As I did he reached his hand in through my car window to stop me. He said, “I just want you to know that I think what your church is doing is wonderful.” I thanked him and drove away with tears in my eyes.

Inspiration! When was the last time you heard people talk about the church that way? It’s not exactly a word you hear associated with the church. Irrelevant, old fashioned, declining, yes. Inspiration, no. But that’s what you, the people of St. Mark’s did. You inspired a community, a city to rally to your side in aid of a vulnerable family in need.

The article is reprinted with permission from Neo(un)Orthodoxy.