“Welcome to Worship. May we see your membership, please.”

Perhaps you have found yourself in this situation. You’re headed home after work, most likely late. There’s some kind of class, game, or meeting after work and you just don’t have time to get supper prepared, eaten and cleaned up before you have to be out the door again. Solution? Costco! So you run to that bastion of big-box store, wholesale shopping to quickly pick something up. But when you get there, face to face with the smiling greeter, horror of horrors, you don’t have you membership card. The smile quickly dissipates from the greeter’s face. You find yourself unceremoniously turned away, rejected. 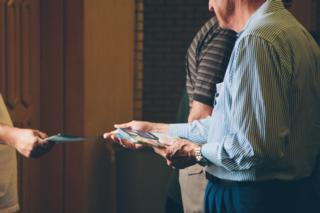 Or perhaps it was a situation where you borrowed a friends membership card, unknowingly aware of the serious crime you are about to attempt (or knowingly, let’s face it we’ve all tried it). You pick up your cart full of wholesale goodness and head to the check-out line, that ominous, long line. The cashier takes the card and eyes it, then eyes you. She does a quick back and forth from the card to you. The picture on the card and you don’t match. No groceries for you! You are banished to customer service for a temporary membership or worse, forced into self-exile from the premises, burning with embarrassment.

This is not a knock on Costco. I think they are a pretty decent company. This is a knock on membership. I share these examples by way of analogy. Membership tends to exclude, to be concerned with who is in and who is out. Sadly, all too often this has been the concern of the church. Are you a member? Do you fit the criteria? Can we see your papers please?

This was not the concern of Jesus. Actually he was great at turning the tables on who is in and who is out. Take this story from Mark’s gospel.

Then he went home; and the crowd came together again, so that they could not even eat. When his family heard it, they went out to restrain him, for people were saying, ‘He has gone out of his mind.’ And the scribes who came down from Jerusalem said, ‘He has Beelzebul, and by the ruler of the demons he casts out demons.’ And he called them to him, and spoke to them in parables, ‘How can Satan cast out Satan? If a kingdom is divided against itself, that kingdom cannot stand. And if a house is divided against itself, that house will not be able to stand. And if Satan has risen up against himself and is divided, he cannot stand, but his end has come. But no one can enter a strong man’s house and plunder his property without first tying up the strong man; then indeed the house can be plundered.

‘Truly I tell you, people will be forgiven for their sins and whatever blasphemies they utter; 29but whoever blasphemes against the Holy Spirit can never have forgiveness, but is guilty of an eternal sin’— for they had said, ‘He has an unclean spirit.’

The True Kindred of Jesus

The religious leaders and his own family, clearly people meant to be in the know and on the inside, don’t get what Jesus is doing. The lame, the tax collectors, the uneducated peasants who follow him, heck even the unclean spirits get what Jesus is doing. Those on the outside, on the margins are the ones who are truly in. “Here are my mother and my brothers! Whoever does the will of God is my brother and sister and mother.” It’s not membership in some elite club or even family that matters. Really it’s those who welcome and accept Jesus that are in.

Jesus does this inversion of in and out when it comes to wealth, purity, sight, life and death. Those who think they are in, often miss the point. Those who like to flash their membership card, just don’t get it. What God values, what matters in the Kingdom is obedience, humility, compassion, sharing and forgiveness. That’s what it means to belong in the Kingdom of God and it should be what it means to belong in the church.

In my next post I’ll look at the traditional criteria of membership in the church.