My Week of Prayer for Christian Unity 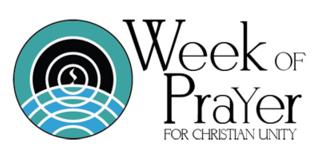 First a little background. The Week of Prayer for Christian Unity is relatively new to the Church. It began in 1908 as a way to bring the Roman Church and other Christian denominations closer together. It became a week focusing on Christian similarities rather than differences. In the northern Church this week long focus on ecumenical relations is sandwiched in between the Confession of St. Peter on January 18 and the Conversion of St. Paul on January 25. Local ministerials and Council of Churches arrange breakfasts, special liturgies and pulpit exchanges to focus Christians’ attention on the unity that Jesus prayed for his Church (John 14).

My WPCU started with our Saturday worship at St. Mark’s. It was question Saturday, where our sermon is basically a question and answer period where people can ask questions about the readings, current events or any theological issue that may be on the mind. The question was asked, “are we getting any closer to Christian unity?” I answered this question in the affirmative in two ways.

First, I see movement among Church leaders toward a move to unity. In the Roman Catholic Church Pope Francis has signalled a more open Church, a Church more open to other Christians outside the see of Rome. I used the example of recent discussions between Anglican Archbishop of Canterbury Justin Welby and Patriarch Bartholomew of the Eastern Orthodox Church. Second, I gave more grassroots and local examples. The animosity between Protestants and Catholics has dissipated. There is more cooperation between churches, especially in the area of social justice. In my own ministry some of my closest colleagues are people from other denominations. While acknowledging that we have a ways to go, yes we are getting closer to unity. 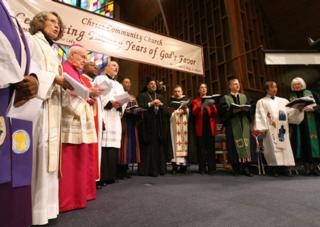 I didn’t even realize until sometime later that there was a perfect example of how far we have come toward unity sitting right in our midst. Visiting with us that night was my cousin, an ordained pastor with the Pentecostal Assemblies of Newfoundland and Labrador (PAONL), a missionary home on break from Tanzania. We’ve grown up together, both of us part of the same small Pentecostal church, and studied at the same Pentecostal Bible College. Our paths have gone in different directions and I’m sure we have differing views on various issues. In spite of this we have stayed close.

And here she is sitting listening to her wayward, Anglican cousin preach and worshipping right along with him and those gathered. Now, keep in mind that there is no way that the pastors of our youth would have been seen in an Anglican church and no way that the priests would have let them in anyway. When we were kids this just would not be happening.

All of this became even more real for me when it was time for communion. The WPCU became as real as it ever has for me when my Pentecostal Pastor cousin came to me and I said “The body and blood of Christ, given for you.” It was a powerful moment for me.

This is what WPCU is all about.

Yes we have come a long, long way in a short time. Yes we have long way to go. But the changes are undeniable. A spirit of cooperation and friendship permeates the contemporary Church. The name on the church sign out front no longer determines whether people will worship there, because young people just don’t care about (or even know about) the old denominational divides. I just hope that denominational and church leaders are paying attention.

Learn more about the vision and history of the Week of Prayer for Christian Unity.