My Journey with St. Ignatius of Loyola (Part 1) 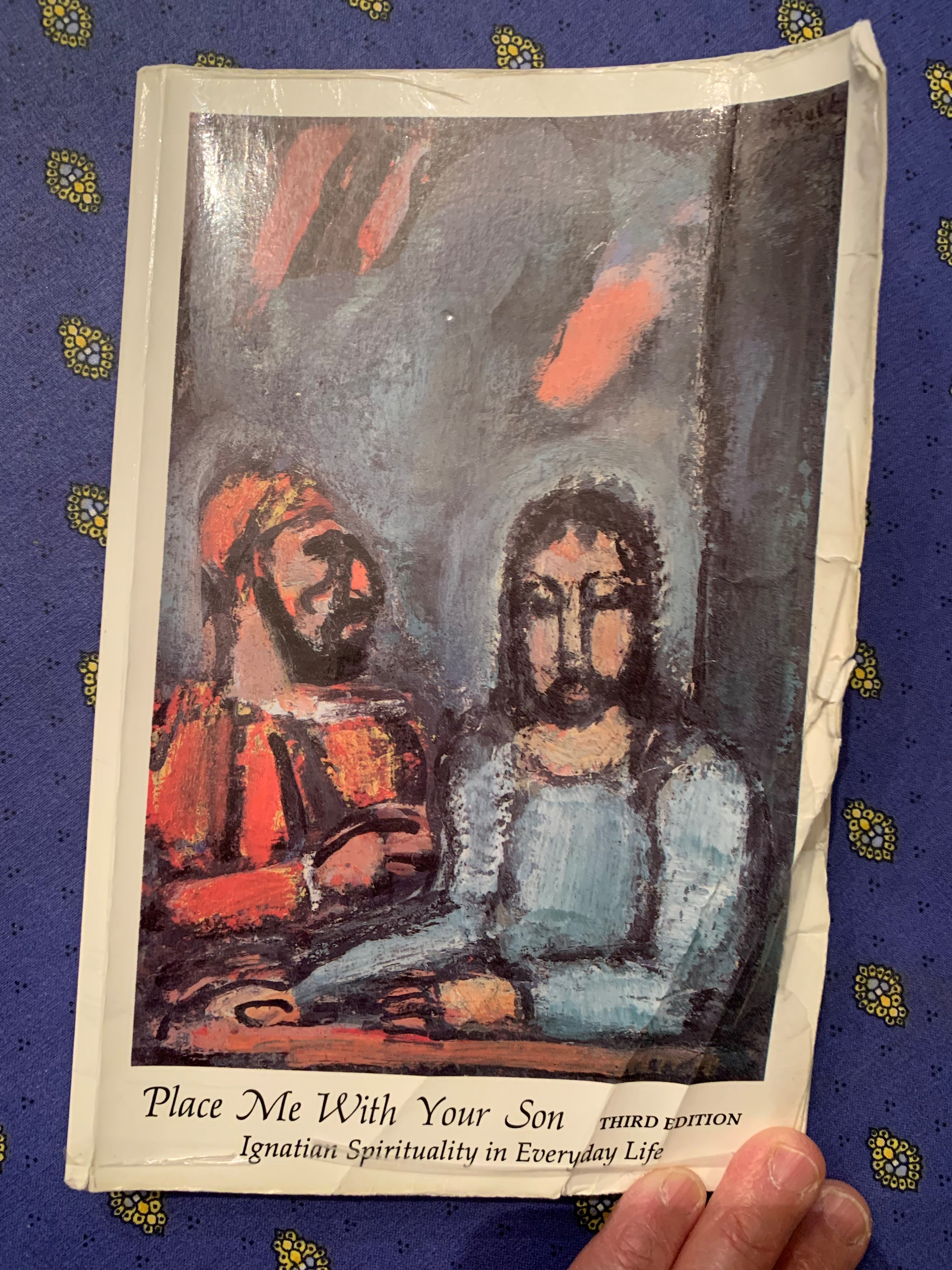 I am going to share an Examen of my journey with St. Ignatius of Loyola.

Around 1998 a friend invited me to attend a presentation in the church of St. Ignatius of Loyola in Mississauga. While sitting in the pew I was distracted. I looked up through the sky window of the church and saw a clear new moon.

My friend asked if I knew anything about the saint. I was only aware that Ignatius was a soldier converted after being hit by a cannon ball. I went home and never gave the matter further thought again.

In late 2000, as a pastime one afternoon, I strolled with my older daughter through a nearby Indigo bookstore. On top of a stack of cookbooks and travelling guides on sale was a single copy of Place Me with Your Son, Ignatius Spirituality in Everyday Life by Fr. James W. Skehan SJ published in 1991.

I picked it up and put it down telling myself, “I don’t need another copy of religious book.” At that point I was preoccupied with the study of a Master of Religious Education (MRE) as a part-time student at St. Michael College. After scanning the bookstore for a while we did not find anything interesting.

I walked back and looked at that book again. Its cover was partly torn and it was on sale for $1.99 from about $25. As a member of Indigo I had another 10% discount. Pretty much a free gift. I bought the book and put it by my bed. It stayed there untouched for a good six months.

Then my father passed away in March of 2001, pre-deceased by my mother in 1994. I was feeling quite low for at least three months. Being the oldest child on both sides of my parents’ family I would likely be the next one in line to go. I was not quite ready.

I would like to be as fearlessly in love with God as St. Catherine of Sienna or St. Therese of Lisieux. I felt the need to turn deeper into the mystery of Christ. I opened that book of Spiritual Exercises, and faithfully went through it day by day.

On page 3 of that book, Fr. Skehan discussed ‘The Director of the Exercises’. He mentioned five options. 1. To seek out a trusted friend to serve as a director; 2.  To hold frequent regular meetings with a traditional spiritual director; 3. To find someone to go through the Exercises together and have spiritual conversations weekly; 4. To join a small group of ten or less exercitants and to share mutual experience regularly. This was the format that Fr. Skehan led while he was in Boston College. They met weekly, each time about 3.5 hours to include Mass, Dinner and guidance; 5.

One may make the exercises privately setting time aside each week to review the grace gained and to do some journaling.

The book was clear and easy to follow. The earlier editions were prepared for the Jesuits of the Maryland Province. The edition I bought represented Fr. Skehan’s effort to expand the content for any interested lay people.

As someone totally ignorant of St. Ignatius of Loyola I sought out most of the references given in the back of the book. I did not have one and a half hour a day to sit still so I split the prayer period into two, one in the early morning and one very late at night.

Finally, I was driven single-mindedly to transfer my MRE degree to a Master of Theological Studies (MTS), from St. Michael’s to Regis College.  In parallel I registered for the Diploma in Spiritual Direction even though I had no intention to practice as a spiritual director.

Then I managed to find Fr. Chris Rupert SJ as my spiritual director. He thought I could just continue with the book and told me that the real director was the Holy Spirit. Then he introduced me to Fr. John Veltri SJ.

After I finished with my own Spiritual Exercises, I was so enthusiastic that I wanted to promote a group Spiritual Exercises in my parish. Fr. Veltri said I was caught up by beginner’s zeal. However, he was willing to help me through ‘remote control’ from Manresa, Pickering.

At the same time, I also registered for an evening course on the Spiritual Exercises given by Fr. Ron Barnes SJ at Regis. Little did we know that his mesothelioma would recur by the end of that course. We kept in touch till he died.

I learned from the hiccups of the group experience in my parish. The exercises were out of sync with the liturgical year at that point. People took variable time to progressI penned another series of readings during Lent one year selecting from liturgical readings with emphasis on our collective sinfulness and the Love of all of God’s creation.

It was around the time when Al Gore published his book An Inconvenient Truth. Fr. Jim Profit came from Guelph to our parish to help give a talk.

This is the 500th anniversary year of St. Ignatius’ cannon ball conversion. Now that I am retired there must be a small part that I could play to share the grace received over the years. One of my pastors said, “Coincidence is when God acts anonymously.” (Part II to come.)

Vicky Chen is a professor Emerita, Pathology, McMaster University, an alumna of St. Michael's and Regis and an active parishioner of Holy Rosary, Burlington, Ontario.